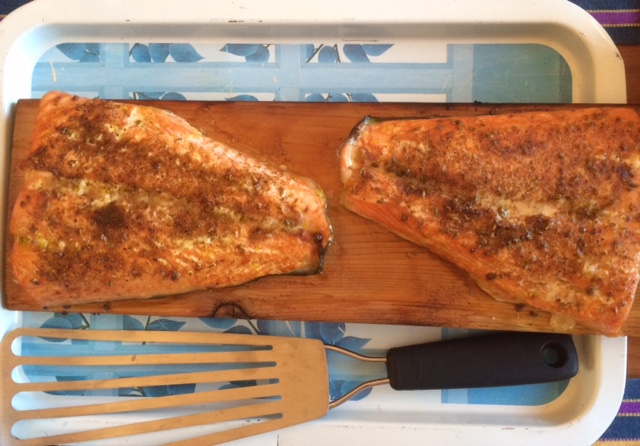 I started on my Carnivore Experiment on January 2nd, sort of. On New Years Day, I ate nothing but meat – oh, and one enormous piece of my husband’s mile-high, nut-loaded, home-made baklava. But up until that day, I had been pretty loosie-goosie with my diet for the past 2 months.

We were involved in the big fall musical in our little theatre. Our performance run was 3-4 nights each week for three weeks, followed by a huge after party for cast and crew. Each night, the kitchen in the green room was loaded with sweets and treats. Lots of unrestrained snacking went on… Although I tried to exercise restraint, everyone would bring their best game when making or baking the snacks, and the variety and quality was excellent. Despite eating a good supper before heading into the show every evening, I indulged in multiple evening snacks and desserts.

The day after the performance run was ended, and the big afterparty wrapped up in the wee hours of the morning, we got on an overnight plane for Mexico City and on to Honduras. We were there for two weeks of building a home in a tiny mountainous village in the hinterlands of the Honduran countryside. We spent two weeks carrying and laying concrete blocks, mixing mortar on the ground with a shovel, carrying buckets of dirt for leveling floors, and various other forms of manual labour. It was hard work and exhilarating, but exhausting. It was important for me to do this work adequately, as I considered it part of my return to my usual me after cancer – strong and capable and adventurous. We were fed by a local woman who made us awesome filling meals, but every meal was based on carbohydrates – rice, noodles, tortillas, potatoes, bread, buns. Porridge or pancakes in the mornings, although there were some days of eggs and sausages (pretty much hot dogs). Desserts were mostly fresh tropical fruits such as banana, pineapple, papaya. Hard, dry cookies (my favourite kind, unfortunately) with coffee after work every afternoon. And a daily walk to the nearest tienda for a cold beer before supper every night. Carbs at every turn. Despite the hard physical labour, I gained weight…

Then, we landed home on Dec 9 and, lo and behold, it was only two weeks until Christmas! By the time New Years Day rolled around, I was carrying about 6 extra lbs above what I consider my maximum comfortable weight. It was time for action! Jeans were tight…

As is my usual nutrition nerdy pattern, I recorded everything about the whole month – intake, labs, fingerprick blood glucose and ketone levels, weight. Yep, I’m a nerd…

So, here’s the results:

Weight: The difference between my highest weight for the month (Jan 2) and my lowest weight for the month (Jan 27) was 9 lbs. The weight loss was slow after the initial drop of water weight, so in reality, It was probably 6 lbs of actual fat loss. That’s awesome for a non-exercising, almost-60-year-old woman! Given that I ate larger than normal meat servings and that I was never hungry, that’s even more impressive.

Measurements: I didn’t take any. I know – my bad. But I can tell you that my almost uncomfortable jeans are looser now, on my waist, hips and thighs, my usual fat deposition places. Despite having a BMI of about 24, in the healthy range, I carry lots of subcutaneous fat stores (jiggly fat – not the kind that is a health risk), so this is a noticeable change. I don’t have abdominal visceral fat after so many years eating low carb/keto, so fat loss is hard to achieve but noticeable when it happens.

Digestion/bowels: Perfect. I have heard of people having diarrhea issues when switching to full carnivore, but I’m thinking that they are not coming to it from a fully fat-adapted starting point. There’s definitely an increase in pure fat intake when eating this way. But my digestion was beyond perfect. Not once did I experience any bloating after a meal. I was totally satiated, full and at peace, not thinking about food. But never uncomfortable in my belly.

At the other end, things were pretty well perfect as well. Because meat is so very biodigestible, there’s very little bulk material that continues into the large bowel. So stool volume is not as big as when eating fibrous plants, meaning that your rectum does not fill up and send “poop now” signals to the brain as often. Most of our stool is made up of water, and the solids are in large part bacteria, sloughed off bowel lining cells and a smaller proportion of undigested food materials. Omnivores eating indigestible plant carbohydrates such as cellulose (what we refer to as dietary fibre) will have a much larger stool size than someone avoiding these inputs. I found that I needed to “go” about every 2-3 days, stools were slightly smaller than usual, but they were always soft and easy to pass. When eating as an omnivore (keto), I generally “went” every day, again always soft and easy to pass.

Gas… NONE! Bowel gas was pretty well non-existent. This is similar to how I roll when on a keto diet. Markedly better than when I am eating grains. It used to be BAAADDD!

Blood sugars: I have a Precision Neo meter that measures both blood sugars and ketone levels. (For more information and links to my monitoring setup, please visit the Recommended Resources page of this website. I tested my blood sugar levels and ketone levels almost every day of the month. Several things were quickly obvious.

My blood sugars ranged from a low of 3.7 to a high of 4.8, no matter what time of day I tested. Fasting levels were no different than random tests later in the day. What I ate had virtually no impact on my blood sugars – they were pretty well rock stable. That bodes well for my circulating insulin levels.

Ketones: I was in ketosis for the entire month. I only dropped below 0.5 (considered the threshold of ketosis) on two occasions all month. Most of the time, I ranged between 0.8 and 1.8, although there were two days near the end of the month when they spiked to over 3. Those were also the two days when my weight dropped to it’s lowest point for the month. Ketone test strips are expensive and so, despite my nerdy desire to follow ketosis more closely, I limited myself to once daily for the most part.

Labwork: In the middle of January, it was time for my quarterly bloodwork to follow my Ca125, the cancer marker for ovarian cancer. I have also continued with the quarterly bloodwork because my immune system markers, white blood cells (WBC) and neutrophils (Neuts) haven’t yet returned to a fully normal range. I am now 8 months since the end of chemotherapy and I am annoyed that my immune system doesn’t seem to be entirely recovered.

On that morning, Jan 16, my fasting bloodwork showed a FBS of 4.8 (reference range 3.6-6.0) and a fasting insulin of 27 (reference range 20-180). And HbA1c was 5.3 (Reference range <5.5). In interpreting these values, it appears that I am still somewhat prone to the possibility of insulin resistance, as my HbA1c has always been higher than I would have expected given my fat-adapted metabolism. If I didn’t eat this way, it’s likely that I might be at risk of becoming pre-diabetic. I also speculate that my higher than normal protein intake was impacting on my insulin levels, as protein has a moderate insulin-raising effect.

Last July, I had my bloodwork done in the middle of a 72 hour fast. My fasting insulin that day was 16, actually below the reference range. So carnivore is definitely moving the needle upwards in relation to a full fast. Although these are only two isolated data points, they seem to be telling a story. I might be better to eat a larger amount of fat in proportion to my protein intake.

Although it has nothing to do with my Carnivore experiment, I am happy to report that my Ca 125 level was perfectly consistent at 5, same value as on the previous two quarterly reviews. Prior to the cyst removal last fall, it was 42. Normal is below 36. I’m happy…

Skin: Entirely subjective, but I feel like my skin is softer and smoother. And tighter. That’s a good thing for an almost-60-year-old in the dead of a Canadian winter…

Mental Clarity: It has been an extremely productive month in terms of my writing on the book, starting to prepare an online course, staying focused on my goals, accomplishing lots of stuff and feeling very positive. No mental brain fog at all – gotta love it.

So, going forwards… I am continuing to be about 95% carnivore. I have started consuming a small amount of vegetables at supper with my husband, just to make things more normal, but lunch and any snacking are still 100% carnivore. This feels very sustainable.

*This post contains Amazon Affiliate links. If you click on them and purchase through these links, I get a small commission at no cost to you. It just helps with a bit of extra income so that I can continue to get the message out about these powerful nutritional interventions.