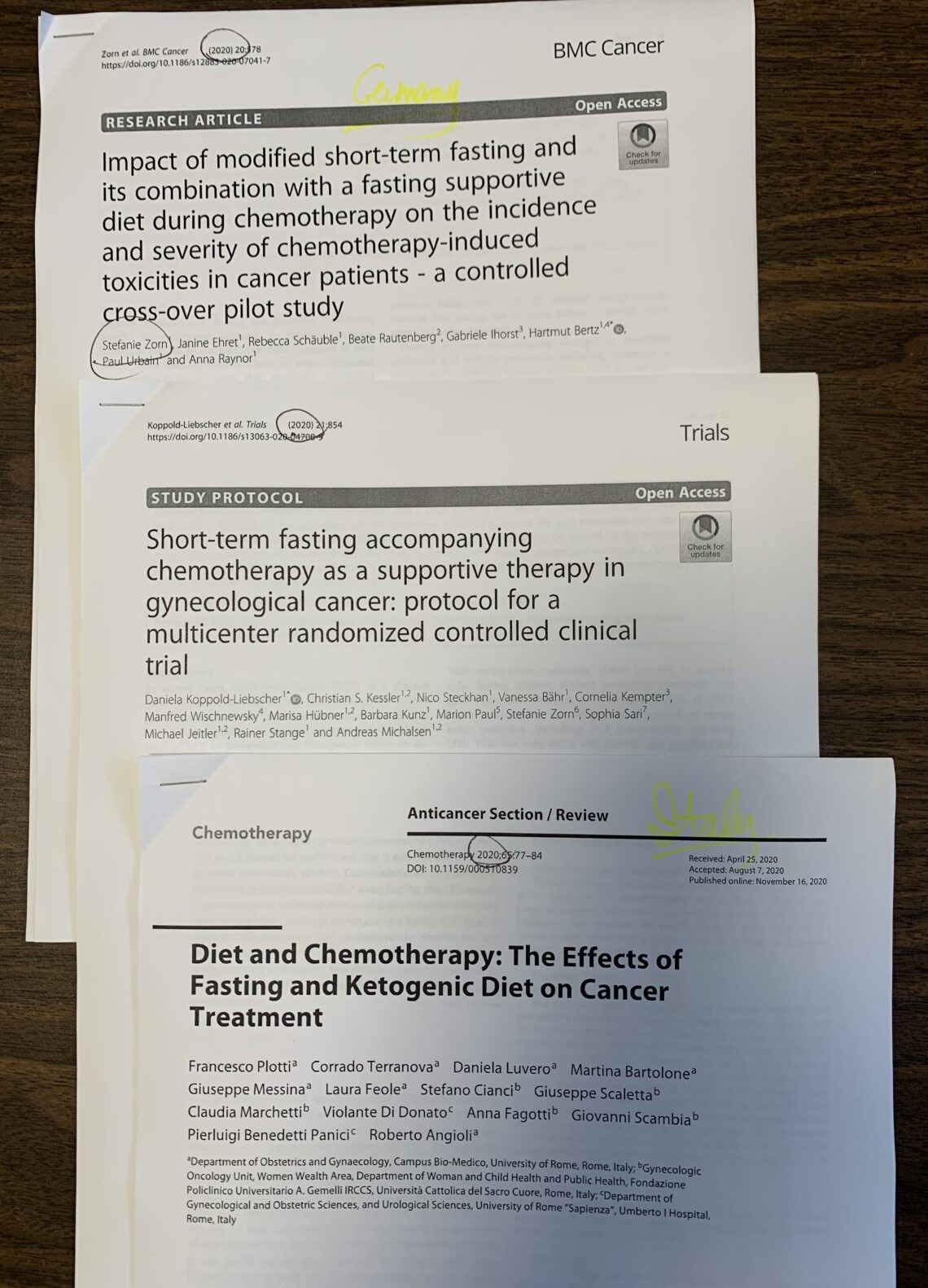 When I started looking into the research for cancer metabolism and it’s implementation for cancer treatment three years ago, there was lots of evidence that had been gathered from in vitro studies of cancer cells and from animal studies, but the number of studies that used humans (called clinical trials) were pretty scarce.  The area was too new.  But as I have written before, cancer patients facing treatment cannot afford to wait for the medical establishment to move at its sometimes glacial pace through the research process to its eventual conclusion of endorsing a practice based on the “evidence”.  The work of Dr. Valter Longo’s lab using fasting during chemotherapy and the work of Dr Adrienne Scheck using a ketogenic diet to impact on radiation in brain tumours was published and definitely pointed to excellent outcomes for these dietary interventions when used with traditional cancer treatments of chemotherapy and radiation therapy, so I dove right in…

The field of cancer metabolism has exploded in the last three years since I did my initial research.  Books such as The Cancer Code by Dr. Jason Fung, Ravenous  by Sam Apple and Ketones: The Fourth Fuel by Travis Christopherson have blown open the conversation about cancer’s metabolic differences and challenged our deeply held beliefs about what we think cancer is and hence, how to treat it.

Cancer is still a disease of genetic mutations – nobody is disputing that there’s all manner of genetic disruption in a cancer cell.  The exhaustive research work done to identify oncogenes, tumour suppressor genes and tumour identification is nothing less than mind-blowing, but it hasn’t led to much significant change in treatment options or in improved outcomes, except in a few specific cases.

Metabolic abnormalities, however, are fairly universally present in cancer cells and thus provide a better place to try and make life miserable for the cancer cells.  Restricting their access to their preferred fuel and the growth factors that they love to use for boosting their growth ability is possible using low-cost, easy to implement, and highly effective lifestyle-based interventions.

I recently found three articles that have been added to PubMed that take the research on fasting and ketogenic diets further than what existed three years ago.

The first is called Impact of modified short-term fasting and its combination with a fasting supportive diet during chemotherapy on the incidence and severity of chemotherapy-induced toxicities in cancer patients – a controlled cross-over pilot study. Here’s the link to the free access article.  This was a cross-over trial looking at the effectiveness of Modified Short Term Fasting (mFST) on chemotherapy side effects and overall toxicity of chemotherapy and tolerance to chemotherapy.  Thirty patients with gynecologic cancers used either 96 hour fasting (allowing up to 25% of their normal calories on fasting days) or regular caloric intake through chemo sessions.  They also added a week of ketogenic diet prior to the fasting periods for some of the participants to see if it made a difference to the comfort level of the fasting intervention.

The fasting protocol used a ketogenic (75% fat) composition very low calorie diet and encouraged 2.5 litres per day of calorie free fluids without stimulants such as caffeine.  Caloric intake was about 400-600 kcal/d.  The presence of ketosis was monitored by urine sticks and confirmed by a blood level just prior to chemo.  The participants would fast for half of their treatments and eat normally for the others, switching at the halfway point.  One group started with fasting, the other started with regular diet.  The keto diet was added to the fasting regimen of half the group, with the goal of seeing if being in ketosis in the week prior to the fasting time made it easier.

Results were significant and supportive of using fasting in this way.  Participants reported significantly less stomatitis (mouth inflammation and sores), less headache, less weakness, and the total toxicity scores were significantly reduced as well.  In addition, there were less chemo postponements post fasting, meaning that the chemo was better tolerated.

Growth factors such as insulin and IGF-1 were both reduced during mSTF.  From the study discussion:

Previous experimental data indicate that it is mainly low IGF-1 levels that induce differential stress resistance, leading healthy cells to be protected from chemotherapy’s toxicity, and mediated by the downregulation of cell growth and proliferation, while tumour cells are unable to activate a protective response [4, 5, 37]. Since we observed both reductions in IGF-1 and chemotherapy-induced toxicities, our results support the hypothesis that reducing IGF-1 promotes differential stress resistance.

This supports the theory that I explain in Hacking Chemo – putting your healthy cells into “stealth mode” while the cancer cells experience increased stress from deprivation of fuel and growth factors, identified as “differential stress resistance”.

This is a protocol article, so the study hasn’t been done yet. The plan is for 150 chemotherapy-receiving patients (120 with breast cancer, 30 with ovarian cancer) from several German cancer centres, to be randomized to one of two nutritional interventions to accompany their chemo treatments.  The first intervention will be short-term fasting with a max of 350-400 kcals/d and the other will be normocaloric plant-based diet with restriction on refined carbs.  They will be looking at disease related quality of life scores and also an anxiety/depression score and side effect frequency and severity.

The fasting group will receive only vegetable juices and vegetable broths, up to 350-400 kcals/d, a regimen that is used popularly throughout Germany, known as the Buchinger fasting technique.  The fast will go from 36-48 hours before chemo to 24 hours after chemo (same interval as my Chemo Fasting Protocol).  The between-treatment diet that is encouraged is a whole-foods lactovegetarian diet, although up to two servings of meat/fish and two eggs per week are added if the participants request it.  They will also be encouraged to practice time-restricted eating with a 14 hour fast daily.

The plant-based group will be taught a normocaloric, whole-foods, plant-based diet with restriction of sugar and refined carbs to be used for the same time frame around chemo as the fasting group above.  During the rest of the study time, they are also encouraged to follow the lacto-vegetarian diet, same as the other group.

The study participants have been recruited over the past few years and the study is underway.  I will be interested to see the results, especially in such a large study group.

The third article was a review of the current literature on fasting and keto diet during chemo, done by a group from Italy.  It is called Diet and Chemotherapy: The Effects of Fasting and Ketogenic Diet on Cancer Treatment.  Link is here:

The researchers did a literature search looking for human studies using fasting and keto diet during chemo.  They found 4 studies using keto diet and 4 studies using fasting during treatment. All articles were positive about the improvement in quality of life and fatigue in the 8 days post-chemo.  All articles suggested that fasting and keto diet were both found to be tolerable and feasible during cancer treatments.  Although the numbers were too small to make any conclusions re longterm outcomes, the reduction in collateral effects of chemo and better quality of life were shown in all studies in comparison to participants who followed no dietary interventions.

The problem is that there’s no money to be made by proving that a free and fairly easy intervention like dietary manipulation is effective, so conducting studies to examine this area doesn’t have a longterm payoff in financial terms.  So, those of us doing the n=1 experiments on ourselves will need to continue doing our thing, until science finally catches up. 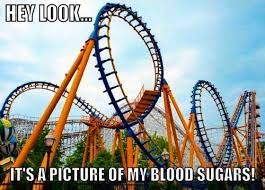 Spring Cleaning Fast – The week after… 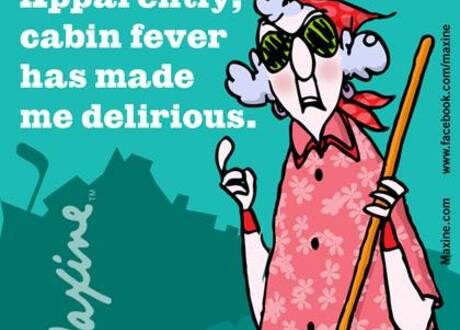 Spring Cleaning on the Inside – My 72 hour fast 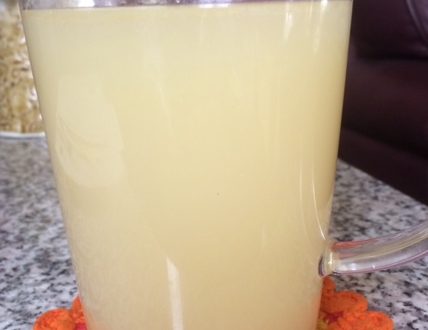 My Fasting Protocol in a Nutshell