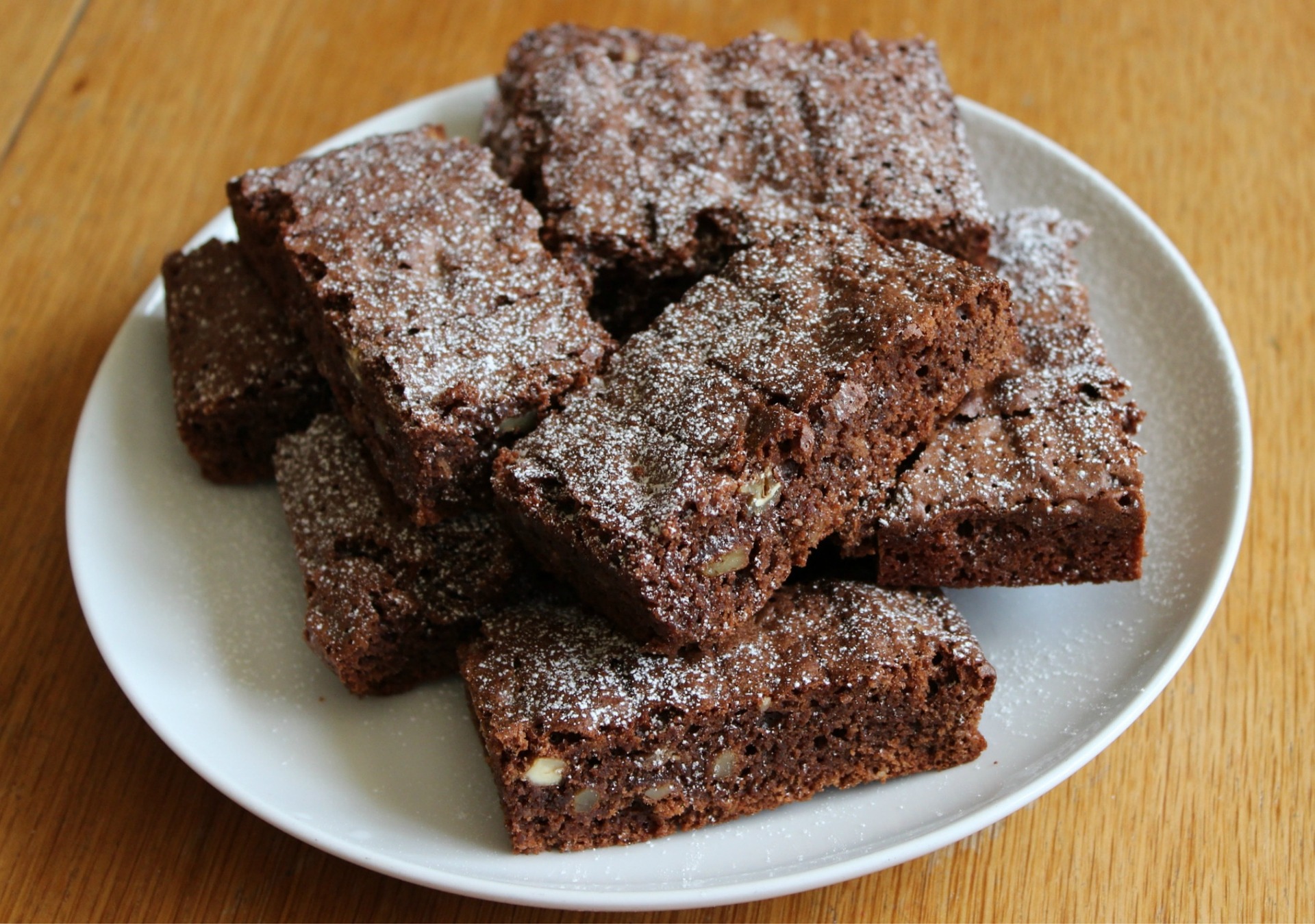 You know that expression, “Life’s too short”? Well, life’s to short to waste it making bad desserts…

I’ve tried.  I’ve really tried.  I have tried over and over again to like keto baked products and it just isn’t working.  I have spent hundreds of dollars over the last few years on expensive substitutes for the forbidden ingredients – flour and sugar.  And it’s been a flop – pretty well every darn thing!

I have never had a huge sweet tooth, but I did used to like to bake basic things like banana muffins and drop cookies.  I had a few favourite recipes that I used forever.  Banana chocolate chip muffins that I would make with my boys when they were young.  Peeling and mashing bananas is the perfect “helper” job with small children. Gingersnap cookies from my mother’s vintage 1963 cookbook, made every Christmas.  Mom’s famous brownie recipe, the one that captured my now-husband’s heart when we were teenagers. A cakepan version of cornbread to go with chili or stew, my dad’s favourite. Rice pudding, baked in the oven with Carnation Milk and raisins and freshly grated nutmeg. Those were the sweets of my childhood and my children’s childhood, the sweet memories of family and love all tied up in desserts.

In the sixties and seventies, most suppers ended in dessert.  The term was loosely applied to a single oatmeal cookie, maybe a serving of jello, or canned fruit divided into four little nappie bowls.  Graham crackers were a dessert in my house.  Mom sometimes made homemade blanc mange or butterscotch pudding, stirring the sweet milk and cornstarch mix on the stovetop to ensure that it thickened perfectly and didn’t scorch.  I loved those puddings.  Ice cream was a very rare treat because our old fridge couldn’t keep a brick frozen.

Fast forward 20 years…  My kids were raised without the tradition of daily dessert.  We ate dinner, then it was over.  Desserts were for special meals – company, celebrations, holidays.  Or if mom (that’s me) got bored and baked, or had succumbed to a craving for something and baked.  And baking muffins was an activity that I did with my boys for many years.

So when I went low carb about 8 years ago, I was interested to try the substitutions for flour and sugar and experiment with alternate cooking methods and recipes to recreate some of those treasured desserts, or to find new favourites.  I bought almond flour, stevia, erythritol, coconut flour, xanthan gum, monkfruit, Swerve, Truvia, lupin flour, pecan flour, flax meal and ground chia seeds.  Then I spent more money on coconut oil, MCT oil and avocado oil.  And even more money went into artificially sweetened chocolate chips.  And a small fortune spent on nuts!

I know that there are bloggers and influencers out there who tout the wonders of their keto baking creations and wax poetical over how wonderful their muffins or lemon bars turn out, but it hasn’t happened for me.  Firstly, I can’t seem to get the texture right.  Either too heavy, dense and damp (like often happens with nut flour products that rely on eggs for structure) or so dry that they crumble and dessicate your mouth (like coconut flour baking).  Secondly, I can’t get the sweetness right.  The sugar alcohols such as erythritol have a cooling mouthfeel that is almost like menthol and it really detracts from the baking for me, especially when combined with “warm” spices such as cinnamon or ginger.  Stevia leaves an aftertaste.  Monkfruit is okay, but usually mixed with erythritol.

And so many sweeteners use “oligosaccharides” as one of the ingredients.  These do terrible things to my guts and many times I have bought expensive bags of sugar substitutes, used them once and then pitched them in the garbage after a day and a night of lower gastric distress of the most distressing kind!  Same with xanthan gum, the darling structural binder of the gluten-free world.  Kryptonite to my guts, despite the tiny amounts used.  Another expensive package relegated to the garbage bin…

Yesterday, I was feeding two 30 year old young men for supper and I decided to make dessert for them.  But since I kind of wanted some myself, I decided to make a keto dessert.  I used a keto peanut butter and chocolate brownie recipe, but had no almond flour so substituted lupin flour, a new ingredient that I had recently found and purchased.  And for sweetener, I used my new favourite allulose, a “rare sugar”, so called because it costs more than gold!  But being a natural sugar analog, it has no aftertaste and seems to agree with my insides.  I practically had to get a second mortgage on my house to buy a 2 kg bag online, but it’s worth it, right?

The brownies smelled divine while baking, but ended up dry, not very sweet and I spent a very uncomfortable evening trying not to disturb my husband with all the farting that ensued after eating only two of them.  We ate them with milk or heavy cream poured over top to try and cut the dryness, which was only partially successful.  The boys were polite, but nobody begged for seconds.  My husband asked me if they were “real” brownies or “fake” ones, meaning traditionally baked or “keto” baked.  He declined to have any.

This morning, as I was packing my lunch, I looked at the remaining brownies in the pan, thought about my uncomfortably gassy night and had an epiphany.  Why was I trying so hard to replicate sweets?  Why not just make the real thing for the few times that I actually ever bake.  It would make my family happy, I wouldn’t be embarrassed to serve it, and the occasional excursion into sugar and gluten wouldn’t be life threatening in any way.  So much joy for such a small concession…

Now, if I had a true gluten allergy, obviously I wouldn’t be blithely recommending that you fall off the wagon.  But I don’t. I purposely buy organic wheat or spelt, organic sugar and brown sugar, and we make real maple syrup, so I have wonderful, safe, glyphosate-free ingredients.  And of course, real butter.  No industrial seed oil crap in this house!

And if I had a true sugar addiction, I would not be suggesting that any kind of sweet-flavoured baking is not a huge trigger risk. But I don’t.  My sweet tooth is minimally developed and is easily satisfied and just as easily overwhelmed.

So, this evening, the rest of the brownies went into the garbage.  Then I got out a big green garbage bag, opened up the baking ingredients cupboard and started pitching things.  All the alternate flours – coconut, lupin, tapioca starch went into the bin.  I kept the flaxmeal.  All the sweeteners except the allulose and the organic real sugar are gone.  Screw it!

For a long time now, my body has been telling me that it’s not happy with many of these “keto” products.  It tells me by how painful and gassy my gut becomes, often to the point of smelly diarrhea.  But for years now, I have also suffered from occasional “sugar coma”, the sweet-induced brain fog, headachy, gut bloating lethargy from eating too much sugar at one time.  It’s time to love my body enough to listen to its message and give it the best possible ingredients, in the most appropriate quantities, with the best flavour so that I can love what I eat and still feel great afterwards, like I have nourished my body and my soul and my emotions, all at once.  Like those childhood desserts from my mother.

I’m making a promise to myself. When I want to bake something sweet for my family or for myself, I am going to use real ingredients like my mother would have used. I’m going to make “real” brownies that make my husband fall in love with me all over again and that aren’t embarrassing to feed to company.  I will make guilt-free gingersnaps and shortbreads at Christmas without stressing about how I might “reduce the carbs”.  And I am going to savour every delicious, buttery sweet bite without guilt.

The Plot Thickens – Hospital Admission and Influenza A!