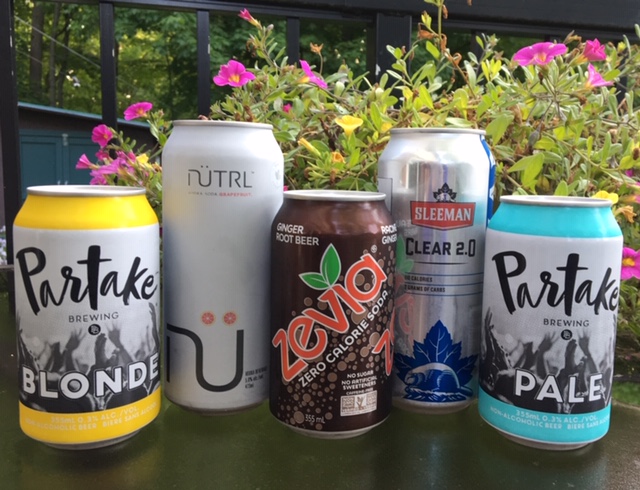 Well, in my part of the world (Central Ontario Canada), we are about a month behind in the weather but despite that, it’s the Solstice – the longest day of the year, the first day of summer! Although we seldom get a high temp above 20C (68F) yet, the long evenings and sunny days (in between the rainy ones…) entice us to sit around with a cold beverage. Lots of socializing happens at this time of year, often involving barbecues and long cold drinks.

You can do this very easily while keeping it keto. There are more and more great sugar-free and low carb options available this summer. As an almost non-drinker, I was surprised to wander through my local LCBO (Ontario’s alcoholic beverage supplier) this spring and see the wide range of options available for an LCHF approach to imbibing.

The first thing to consider is whether you want to consume actual alcohol content or not. Alcohol contains a significant amount of energy – calories – and they will be burned preferentially by our body, as the actual alcohol molecule is toxic to our bodies (hence the buzz…). And consuming alcoholic beverages, even in moderation, tends to slow weight loss by reducing the ability of the body to burn fatty acids. There is evidence in the scientific literature that a glass of dry red wine occasionally is a beneficial thing for heart health and longevity (aka the Mediterranean diet) , but there’s little support for other alcoholic beverages as health promoters.

Luckily there are lots of low alcohol options as beer substitutes. But many of them are not necessarily low carb. Becks, a German company, have been selling a very nice low alcohol beer in grocery stores for years. However, there are 11 g carb in a bottle. That’s a lot for someone following a low carb or keto diet. PC is now making a low carb version of their PC branded no-alcohol beers, but most of their line is not low carb either.

I recently found the Partake brand in my local beer store. The first one I tried, the IPA, was very strongly hoppy, but I have since found the Blonde and Pale versions (in a local Foodland grocery store) and like them better. Only 10-15 kcals and 0-2 g of carb per can. I can enjoy having a beverage that’s cold, fizzy, not sweet and that doesn’t impact on my cognition or my ability to get in my car later in the evening… And doesn’t impact on blood sugars, insulin levels or ketone levels.

Sleeman’s, an Ontario brand, has been making a low carb beer option for several years. They have recently re-branded it as Clear 2.0. It contains alcohol, but only 2 grams of carb per large can. It’s a delicious alternative for days when I don’t have to worry about getting in a car later.

I also discovered that vodka soda’s are the next big thing at the liquor store. Like radlers last summer or ciders the summer before, they are available in a wide variety of flavours from a host of different companies. They are essentially a carbonated soda water with flavour essence and vodka added. No sugar or sweeteners added, no carbs, but contains calories from the vodka. Great for taking to parties, but a much cheaper option when you are at home would be to use your own flavoured club soda and add your own vodka…

You can also use the Zevia brand soft drinks as a beverage mixer. Zevia uses stevia leaf extract as sweetener and contains no industrially produced artificial sweeteners such as aspartame or splenda. There are cola, ginger ale and root beer variations that would make nice mixed drinks. Again, account for the calories and the effect of the added alcohol. Pure alcohols such as vodka, rum, gin, etc have no carb content, despite being made from grains, sugar cane, etc. Distilling removes all that…

Lots of options for enjoying the summer and a long cold drink. Choose wisely and consume modestly – and you will not sabotage your goals. Happy Summer!

Keto in the Summer, or “What About Corn on the Cob?”