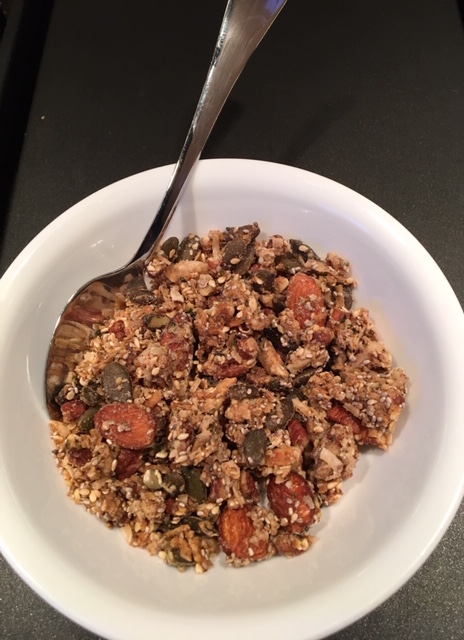 There are certain things that make sticking to a ketogenic diet easier. As much as I love meat, eggs, healthy fats and vegetables, there are times when I can’t face another egg, and I just want something that at least resembles a grain product, like bread, cookies or cereal. And sometimes, you just need something a bit sweet. Or something crunchy.

That’s where this granola comes in. It’s sweet, thanks to non-nutritive natural sweeteners. It’s crunchy, thanks to the long baking time. It can be eaten dry, like a cookie substitute. It can be a cereal, swamped in almond milk, cream, yogurt or kefir.

The basis of the cereal is nuts and seeds. High in healthy fats, low in carbs, gluten free, paleo, vegan – it hits all the right notes. It’s also freakishly delicious and very easy to overeat. Ask me how I know…

I decided that since it’s granola-like, but not grain based, it needed a new name. Others have called it No-la, since it’s no-grain-ola, and I thought of Nut-ola, but what it really is? It’s freaking crack – that’s what it is! The first time I made a batch (and a batch is big!!!), I ate the entire thing in a few days. Breakfast with almond milk, afternoon snack as sweet, crunchy finger food, evening snack with almond milk again, or possibly dry with tea. Just way too much.. So it became known in my mind as Crack-ola. And that has stuck.

It is loosely based on the following recipe, but was made using the ingredients that I happened to have in my cupboards that day. When making it a second time, I actually made an effort to measure and write down what I was doing. It’s a bit different than the first time, but just as good. So, you can make it exactly as in the original post, or you can just use what you have, or your favourite mix of nuts and seeds, but keep the glaze and the cooking method the same.

Here’s the original recipe from Gnom-Gnom Paleo. Thanks to
Paola for sharing her recipe and cooking method:
https://www.gnom-gnom.com/top-secret-grain-free-keto-granola/

And here’s my Keto Crack-ola:

A word about sweeteners. I used a golden Monkfruit sweetener from Lakanto, but any preferred sweetener that measures like sugar will work. A brown sugar style substitute gives the richest “caramelized” effect. And the small amount of real sweetener, whether it’s molasses or maple syrup adds a delicious depth of flavour and some extra stickiness to the mix. Don’t skip it – it’s worth the few extra carbs per serving.

A Tale of Two Muffins