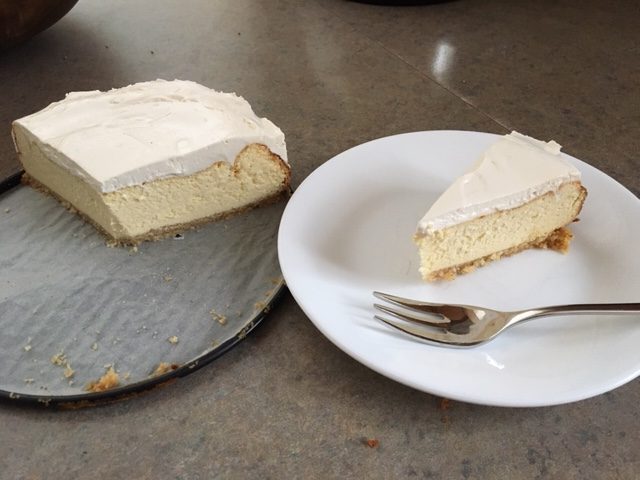 I don’t usually care much for keto baking. I firmly believe that continuing to rely on sweet-tasting foods while trying to maintain a ketogenic diet is defeating the purpose. There’s solid evidence now that consuming diet beverages (artificially sweetened soda pops, etc.) can stimulate an insulin response in the body similar to that produced by sugar. Small amounts of insulin are also released before any sugar enters the bloodstream. This response is known as cephalic phase insulin release. It is triggered by the sight, smell, and taste of food, as well as chewing and swallowing. That’s our body just being its usual wise self. The problem results when there’s actually no sugar coming in. Insulin in the bloodstream will cause blood sugar to drop, so we feel hungry or otherwise crappy and go for something to eat.

One of the main goals of a keto diet and fasting is to keep circulating insulin levels low, particularly when doing keto for cancer treatment. Insulin is a growth factor for cancer, allowing it to access it’s necessary fuel, glucose. But this low level of blood insulin is also necessary for promoting weight loss and fat burning, so it should be the goal of everyone.

Despite that, there’s occasionally reason to use a bit of sweetener for a special dessert. Non-nutritive sweeteners that are in a molecular form that is created by nature (not a lab!) are allowed in low carb and keto diets. The most common of these are stevia leaf extract, monkfruit extract and erythritol (created usually from corn). The lab-built sweeteners should be avoided at all costs – aspartame, sucralose, Ace-sulphame K, Neotame, saccharin.

Ontario has a winter long weekend called Family Day. Most services and stores are closed to allow employees to spend the day with their families. We collected our local family members for a celebratory meal this year on Family Day and I wanted to make a dessert. Since I wasn’t interested in driving into town for supplies, it had to come from what I had on hand. I decided on cheesecake.

I had received a little springform pan for cheesecake when I got the expanded accessories kit for my Instant Pot. So I went looking for keto cheesecake Instant Pot recipes. But they all involved a lot of fussing to make sure that the high water content of the Instant Pot didn’t impact on the cake. I remembered cheesecake as being a pretty simple thing – I have been making a plain New York style cheesecake for years – so I got out my 40 year old recipe card and decided to keto-ize it. Turned out great!

In place of Graham cracker crumbs, I used almond flour. In place of sugar, I used PureVia sweetener, which is maltodextrin and stevia. Any not-too-grainy sweetener would work, I expect. The rest is standard ketogenic diet stuff – full fat cream cheese, full fat sour cream and eggs.