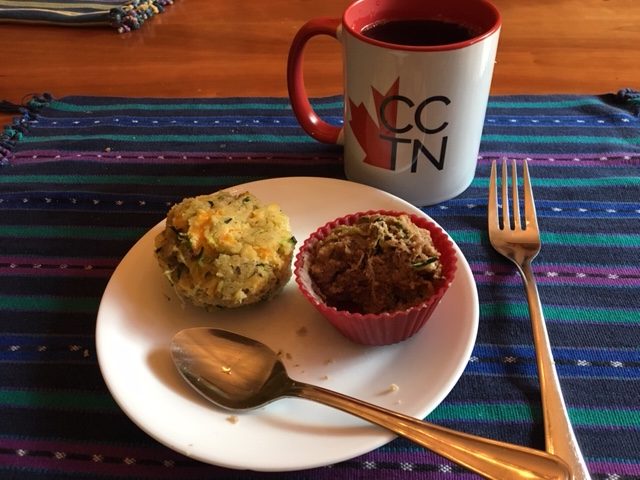 “It was the best of times, it was the worst of times…” (Sorry Charles Dickens 😂) Somebody’s garden had produced a bumper crop of torpedo-sized zucchinis and they had ended up on the staff table at work. So I brought one home. And researched keto zucchini muffins.

What I ended up with was two recipes. One was a sweet zucchini muffin with cinnamon, cloves and ginger, plus pecans for texture. The other was a savoury muffin with oregano and cheese. Both use coconut flour, which reduces the overall caloric content in comparison to an almond flour muffin.

I have tasted them both when warm and fresh. I like the cheesy one better. But it will be a whole different experience once they have cooled completely. I will let you know the verdict tomorrow. “

I will cut to the punch line right away and say that I am not very happy with either of these muffins. But being a tenacious problemsolver, I will probably try them again with several tweeks to improve on the finished product.

Here’s what I learned:

So, I have solved the problem of the not-so-nice texture of the sweet muffin. I scooped the muffin out of it’s silicone cup, destroying it’s structure in the process, and put it into a fruit nappie, then poured a couple of tablespoons of heavy cream over it. Voila! Bread pudding! With the crunch of the pecan pieces and the sweetness and spice of the muffin, plus the creaminess of the HWC to damp down the coconut flour texture, it was pretty well perfect. Somehow the stringy zucchini pieces were more forgivable this way. It would probably be just as lovely if the muffin had been warmed up prior to the cream application, but I ate it cold from the fridge.

The savoury zucchini muffins may end up getting a re-do as fritters with breakfast, cooked in bacon grease and served on the side of bacon and eggs. Anything is improved with the addition of bacon flavouring, right???

My next try at zucchini muffins will have a much more concerted attempt at making the zucchini pieces shorter, either by grating them horizontally, or by cutting up the pieces after grating. And I will be experimenting with better ways to grease the cooking pans or silicone cups. Or maybe I will simply put it into a 8×8 or 9×9 cake pan and call it zucchini cake.

So, the moral of this story is to be careful allowing giant zucchini to follow you home…

When You Are Really Missing Bread on a Keto Diet