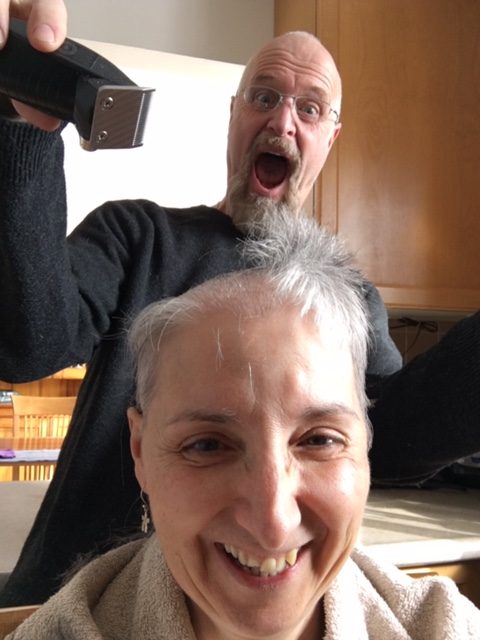 Going bald as a side effect of chemotherapy is not a universal experience, but it’s pretty common. Since chemotherapy drugs are generally targeted at rapidly metabolizing and rapidly growing/dividing cells, it’s expected that hair follicles will be impacted by many of the medications used. There are not a lot of cells that continue in a significant growth phase in human adulthood, but those that are – gastro-intestinal lining cells, immune-system-creating cells, hair follicles – are the ones that get hit as collateral damage.

For women in particular, losing our hair can be devastating. Since infancy, it has been a big part of our identity and our appearance, so it becomes a huge factor in our sense of our own attractiveness, our self-worth, and our power. It’s different for men, who often have a genetic predisposition to go bald as they age, so their attachment to their hair is different. I’m not saying that it’s easier, but a negative stigma of baldness is no longer attached to men. In fact, it has now become a desired condition and a “statement” to be fully bald, shaving one’s head as readily as one’s whiskers.

So, in the interest of sharing my journey for others to learn from, I am going to tell you what I found out about hair, what I experienced and how I dealt with the changes, both emotionally and physically.

The human head has many thousands of hair follicles.  In looking up information about hair, I discovered that the average Caucasian female brunette (of which I was one before going grey) has an average of 100,000 to 110.00 hair follicles on one’s head, about 90% of which are actively in a growth phase at any one time.  The remainder can be in an active shedding or a rest cycle.  Usually a growth phase lasts for several years, before starting into the letting go phase.  But not when chemo strikes…  About 90,000 individual hairs were all about to let go and fall out in the space of a few days!  That could create quite a mess…

The cancer clinicians have enough experience now that they can tell you, pretty much to the day, when you will lose your hair.  And you don’t get much time to think about it.  For my medication protocol, I was expected to lose it somewhere between days 15 and 20 after the first chemo cycle.  So, while you are dealing with the anxiety of going through your first cycle, never sure what the next day will bring, you also have to deal with the hair loss, maybe just as you are starting to feel better from the immediate post-chemo knock-down.

Each individual hair is the product of one hair follicle, a little dip in your skin lined with specialized cells that create the hair itself, and provide it with the nourishment that it needs to grow.  It also produces the oils that protect the hair shaft in a little side gland, and the colour, which comes from chemicals produced in pigment cells (which die as we get older, leading to white or grey hair with age).

So what does hair loss actually look and feel like?  I can only tell you about my experience and the stories that I have been told by friends.  I had been warned that my scalp would start to feel weird or tingly, and that would be a sign of hair follicles shutting down.  And that’s exactly what happened.  I was in the shower on Day 14 of cycle 1, a Sunday morning, and was actively massaging shampoo into my hair.  I have short but very thick and very straight hair.  I generally keep it spiked up so that I still look funky, although I am fully grey/white at this point.  I gave up on colouring several years ago and never looked back.

As I stood in the shower that morning, I suddenly noticed that the crown of my head was feeling tender and tingly.  Only the crown, but it was definitely noticeable.  I took an exploratory tug at a pinch of hair from that area, and to my surprise, I came away with a large bunch of hairs.  They had released from my head with almost no pain, just a “letting go”.

For the rest of that day, I was obsessively stroking and gently tugging at my hair, pulling anything from a few dozen hairs to tufts at a time.  I built little birdnests of hair on a kleenex, threw them out and then started again.  By evening, my hair had noticeably thinned. It was visibly more sparse all over.  I noticed a cool draft on my scalp when I would walk across a room.  Never before had I been aware the draft created by my own movement.  There was no pain involved.  The hair follicles appeared to just let go.  The scalp itself wasn’t as tender or tingly as I had initially noted in the shower, but it definitely wasn’t normal.

There are two approaches to hair loss that I have noticed online and with friends and acquaintances that have gone through this.  One approach is to baby your hair as long as possible, using very gentle brushing and styling, little stimulation when shampooing, hanging on to each little tuft as much as possible.  One friend who took this approach was able to hang on to just enough of a curly lock on her forehead that she maintained the appearance of bangs just being tucked into her hat, and it worked great for her.  She went through hair loss in summer and used light cotton cycling caps and/or painter style hats to cover her few remaining hairs, with the jaunty curl poking out.

The second  approach is to just go ahead and shave everything off.  This comes with the benefit of not having to go through the very messy process of 90,000 plus individual hairs falling all over the place.  Many people with longer hair have suggested getting a short pixie style cut before hair loss begins, as a transition step.  Seems like a good idea, but I haven’t had long hair for 35 years, so I can’t really speak to that.  What I do know for certain is that no matter how short a style you have, going bald is still a hugely different look, feeling, and experience.

Although I thought that I was prepared for the hair loss, I still had to mentally deal with the reality of losing something that had helped define my identity for my whole life.  After it was pointed out to me that I had a bald spot on the back of my head, I knew that I would be going under the clippers right away, but I still couldn’t be rushed.  My husband, the wielder of said clippers, would offer to do the deed, saying “Well, are you ready?”, but I had to mentally prepare myself and it was late morning of the next day when I finally screwed up the courage to sit down on a kitchen chair and let him have at it.

It turned out to be a process filled with laughs.  I have been cutting his hair for years, and both my sons, but never before had he been allowed near my head.  I managed to catch some great pictures of the process.

What I wasn’t prepared for was to find at the end of the process, I didn’t have a nice cleanshaven smooth bald head, I had a piebald coloured sandpaper feeling buzz cut.  Turns out there were still thousands of functioning hair follicles that held onto their hairs.  And since my hair had a lovely range of colours from white to fairly dark grey-black, which elicited all kinds of compliments usually, it now looked like a poorly drawn and coloured map on my head.  Not the look I was expecting!

And it was soooo cold!  The moment I stood up and moved, the breeze on my bald head was almost unbearable.  How do men do it?  Luckily, being January, I was well equipped with a large and varied collection of knitted hats, the product of years of knitting.  I can wander around town wearing a toque and nobody thinks twice.  When I don’t take it off all day at work, some folks wonder, but I’m open to telling them that I’m bald from chemo, and will even whip off the hat and flash them my smooth pate.

I still have a small proportion of my hair follicles growing as normal, so I develop a bit of a bristle on the top every 3 days or so.  I use an electric razor to shave my head more smooth because I don’t like the look or the feel of the bristles.  Once smoothed off, I rather like it.

Going bald is not as easy as I thought it was going to be…  “Yeah, it’s only hair – it will grow back.”  Nope, it’s a bigger deal than that.  But it’s certainly not the most difficult side effect to deal with, and it’s quite the conversation starter.  Now, losing my eyebrows and lashes…  That’s the next step…