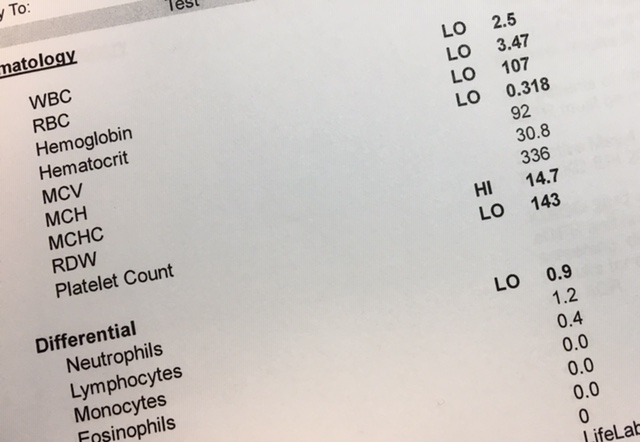 As I approach Cycle 4 of my chemotherapy, I once again headed to the lab yesterday to get blood work completed.  Because I live 3 hours from my chemo clinic, I get blood work done on Mondays, read by the chemo nurse on Tuesdays, then get the go-ahead to come for chemo on Thursdays.  It shortens my very long chemo days to be able to do the blood work ahead of time.  This was my idea anyways, but it has not been working out so well for me lately…

Last cycle, my smug self-assurance that what I was doing with the ketogenic diet and the fasting during chemo was making me invincible, took a beating as I found out that my immune system had been hit hard by the chemo drugs.  My white blood cells and neutrophils were both below the reference range, and the neutrophils were actually below the cancer clinic cutoff.  I rebounded markedly in the last 48 hours before chemo, right back up into the reference range on both counts.  I blogged about that experience on Feb 22.  All the other markers were perfectly okay at that point.  I was feeling pretty bulletproof.

Well, yesterday’s blood work was a rude awakening.  There are 31 different numbers reported on my regular blood work.  Last cycle, two of them were marked LOW. This time there were 7 items out of range, way out of range.  My white blood cells had fallen further below the reference range and the neutrophils were now way below the cancer clinic’s not-so-stringent guidelines.  Those markers are indicating that my immune system took even more of a hit this time around.

But the new wrinkle was that both my Hemoglobin and Platelets were much lower than last time, as were several other red blood cell parameters.  Hemoglobin is the iron-containing molecule that attaches to and transports oxygen to every cell in the body – pretty important function.  It had dropped from good to low in the past 3 weeks, as had several other markers that showed that my red blood cells were suffering.  Red blood cells only live for about 90 days so they are continuously being replaced by new cell production.  The Platelets are another important blood component, responsible for clotting blood and sealing wounds.  My platelets fell below the reference range, but were still above what the cancer clinic considers a critical value.

What all of these blood abnormalities have in common is the bone marrow.  Red blood cells, most white blood cells and platelets are all produced in the fatty tissue that is in the center of our long bones.  It’s a very metabolically active area and critical to health.  Of course, metabolically active areas are precisely what chemotherapeutic drugs are targeted to strike.  So, while my fasting strategy was down-regulating the activity of my metabolically active cells during chemo and for the first day afterwards, once I start eating again, the bone marrow system revs back up into high gear and is hit broadside by the chemo drug, probably the Paclitaxel.

Although I was feeling rather devastated by this seemingly spectacular failure, my chemo nurse was much more pragmatic and also more optimistic.  She felt that I was likely to have a rebound in the immune markers again, enough at least to get me into the chemo suite for treatment.  She was not overly concerned with the Hemoglobin level, indicating that it was still well above their absolute cut-off that would require transfusions (boy, I really don’t want to go there!).  And the platelets were lower, but not any problem yet either.

So, once again, I am traveling to London tomorrow on faith, and the assumption that I will rebound to a level that will allow chemo to go ahead.  And despite my best efforts, I am again required to arrive at the centre at 7:30 am to get blood work repeated.

I remain fully committed to the fasting protocol for the chemo treatment period itself and the ketogenic diet during the rest of the time.  I am still convinced that my lack of side effects such as neuropathy, nausea and debilitating fatigue are a direct benefit of this intervention.  It’s possible that my bone marrow suppression might be much worse if I was not doing these things, but I’m not willing to find out.  Compared to stories I have heard and read, I’m still in pretty good shape.  And despite having short-term anemia and immune suppression, I feel freaking awesome!  Which is partly why I get so surprised by the lab results.  How can I look so bad on paper when I feel so great?  Another part of the mystery and the wonder that is this cancer journey.

The Anatomy and Physiology and Psychology of Chemo Baldness