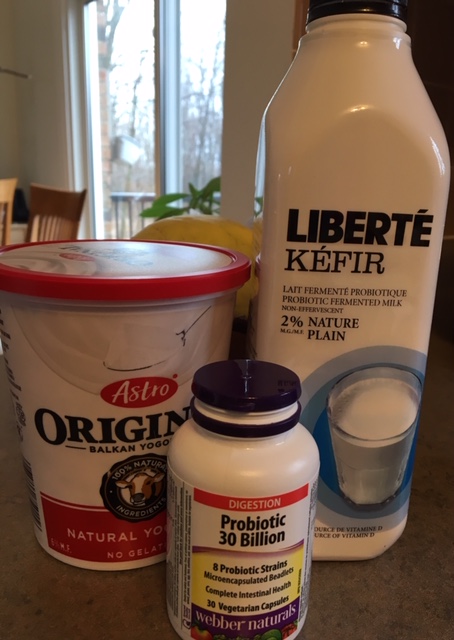 I’m pretty happy with my gut microbiota most of the time, and I’m also quite protective of it.  Until recently starting chemo, I’ve never had bowel issues that required that I do much for my lower gut.  It just ticked along contentedly.

Since starting chemotherapy and some of its adjuvent medications, I have had to deal with med-induced constipation.  A faithful adherence to my “magic keto flax bread” ( http://www.marthatettenborn.com/magic-keto-flax-bread/ ) has taken care of those issues since the first cycle.  But I have come up against a new problem this week.

Thanks to my suppressed immune system, I contracted Influenza A, resulting in a 2-day hospital admission and some of the most intensive antibiotic therapy of my life!   I have been administered five different germ-fighting medications in the past week.  Three oral meds taken together for broad spectrum coverage, followed by an IV cocktail of two different drugs during my hospital admission, then a return to the original three-drug mix.  That’s a lot of abuse to my poor gut bacteria.

Diarrhea is a common side effect of antibiotics, affecting up to 30% of those who take these drugs.

“Antibiotic associated diarrhoea results from disruption of the normal microflora of the gut by antibiotics. This microflora, composed of 1011 bacteria per gram of intestinal content, forms a stable ecosystem that permits the elimination of exogenous organisms. Antibiotics disturb the composition and the function of this flora and enable overgrowth of micro-organisms that induce diarrhoea. .”

As soon as antibiotics are prescribed, bacterial support should be implemented as well.  But when following a strict keto diet, most people do not use the common probiotic dairy foods, as they often contain added sugars and naturally occurring dairy sugars.  It is important to buy unsweetened versions of these products, and as high in fat content as you can find.  This also reduces the carb content.

Remember that the nutrition information on the outside of a nutrition label has been derived from placing foods into a piece of equipment called a bomb calorimeter and then burning it to determine how much energy is given off, measured in calories.  The numbers that result are generalizations, and don’t reflect how a food is going to be processed in a given organism (for example – you) on a given day.

Cultured dairy products are a good example.  A properly fermented, live-cultured dairy product will have most of the lactose (sugar) broken down into lactic acid and hydrogen gas.  This is the same bacterial digestive process that happens in your gut if you are lactose intolerant and don’t digest the lactose further up the line in your small intestine.  That’s why yogurt is acidic/tangy, and slightly frothy.  In contrast, our bodies usually digest lactose by breaking it into it’s two component parts – glucose and galactose. Both sugars.  Once the bacteria have done their job, there’s less sugar in fermented dairy than what the label indicates.  You can eat modest amounts of fermented dairy and remain in ketosis.

One of the keys to remaining in ketosis is to avoid too much carb content at any one meal.  Taking a half cup serving of yogurt with breakfast and another half cup of kefir later in the afternoon is better than sitting down to a huge bowl all at once.

If plain fermented dairy isn’t your thing, it can be made more palatable with the use of natural non-nutritive sweeteners such as monkfruit, stevia, erythritol, or any combination of these that you prefer.  I have added 2-3 heaping tablespoons of monkfruit/erythritol blend to a full 650 mls container of yogurt and stirred it in.  I added about 2 heaping tablespoons to my litre of kefir.  You can also add pure vanilla extract to make vanilla flavour, lemon or lime zest and juice, or mashed or pureed fresh or frozen berries.  It can be used with a few nuts or seeds sprinkled over for texture, or topped with a keto-friendly granola such as my Keto Crack-ola (Blog post coming soon with recipe – stay tuned…).

Freshly cultured vegetables such as sauerkraut or kimchi can also be used, but they aren’t my favourite, so I can’t speak to their efficacy for diarrhea prevention.

A probiotic supplement is another good approach.  Choose one with multiple strains, not just one, and get as high a content as you are willing to spend the money on.  Some probiotics are micro-encapsulated to ensure that more of them survive the high acid environment of the stomach and make it to the lower intestine.

With any probiotic approach, food or capsule, take it away from the time that you take your antibiotic, by several hours if you can.  This will ensure that the wee beasties have the best possibility of getting to the bowel intact.

Remember too that dietary fibre has the effect of both preventing constipation and helping to prevent diarrhea, by providing a bulking, water-holding characteristic to bowel contents.  Don’t be afraid of continuing to consume bulking type foods such as flax, psyllium, nut meals, avocado.  Avoid more osmotic foods such as prunes or prune juice (which don’t fit in a keto diet anyways).

With a little forethought, you can avoid the annoying and inconvenient and potentially dangerous side effect of antibiotic-induced diarrhea, while maintaining the health of your precious microbiota.

The Effects of the Dex (it rhymes… 😊)

Side Effects – The Rundown